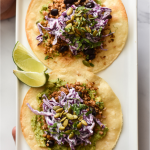 Cauliflower and walnuts are the base for these flavor-packed vegetarian tostadas. The creamy purple cabbage slaw and other toppings really take the satisfaction factor over the top!

Oh, tostadas. I love you, and you don’t get nearly enough attention.

Seriously though, what’s not to like? You start with a crispy and perfect tostada shell. Then you add a slightly spicy, uber flavorful plant-based cauliflower walnut “meat” and all of your favorite taco fixings to get this beautiful and satisfying dish. We’re taking vegetarian tostadas to the next level because as much as I love beans, we can make things more interesting than that.

This is one of those examples of a plant-powered meal that just feels good to eat. The flavors are spot on and while it’s vegetable-heavy, it doesn’t leave you hangry an hour later.

Let’s talk about this cauliflower base. Cauliflower has become trendy as a meat stand-in because of it’s hearty texture and versatility. I’ve tried a few recipes for this “meat” that mimics ground beef, but I especially love this cauliflower walnut vegetarian taco meat, which was my inspiration here.

For this version, I swapped out the chipotles in adobo and instead leaned on dried spices (smoked paprika and garlic powder) because I always have them on hand. I was really happy with the result!

It may seem strange, but the cauliflower walnut “meat” is delicious and has a great texture. Such a creative way to incorporate some additional vegetables too.

While it cooks, you can prep the creamy purple cabbage slaw. It’s made with Greek yogurt, cilantro and lime (three staple ingredients in my kitchen!). Any kind of cabbage would work, but I think the purple color is so nice here.

A quick tip on the tostada shells: did you know you can easily make them at home using corn tortillas?

I actually prefer doing it this way instead of buying the pre-made shells so I can use the tortillas in a bunch of different ways. To make them, cover the bottom of a small skillet with canola oil, heat over medium-high and cook tortillas one at a time until browned and crispy on both sides. Let them cool and crisp up even more on a cooling rack.

The rest of the assembly for these is easy and straight-forward. Here’s the order I prefer:

Per usual, the toppings are customizable based on what you have and/or prefer. Other ideas: salsa, shredded romaine, thinly sliced radishes, or even leftover roasted vegetables like squash.

Add these into your Taco Tuesday rotation to shake things up from the usual tacos and burrito bowls. I promise even the meat-lovers in the house will approve! 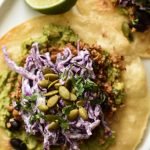 Cauliflower and walnuts are the base of the “meat” on these vegetarian tostadas. The toppings and fresh cilantro lime slaw really take it over the top though!

This post was originally published in January 2018 and was updated in April 2020.

Join my VIP list and I'll send you five reader favorites! Healthy, flavor-packed recipes. What's not to love about that?

Success! Now check your email to confirm your subscription. 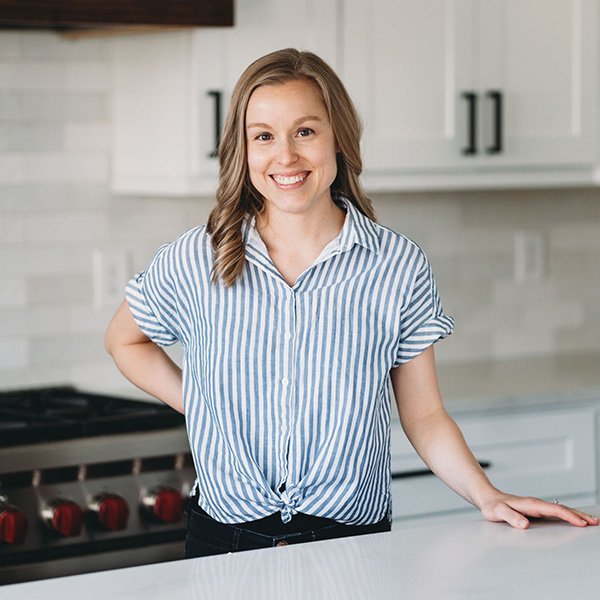 I’m Leanne and I created this space to share beautiful, wholesome, plant-forward recipes that are equal parts approachable and delicious.

Get new recipes straight to your inbox, every week.

Get new recipes straight to your inbox, every week.